Check out our information for the Middletown community and surrounding areas as well as media releases for upcoming and current events and activities.

The City of Middletown is pleased to announce plans to move forward on a promising opportunity to bring new life and vibrance to Middletown’s front door. Middletown City Council authorized the contingent purchase Towne Mall site as part of a redevelopment effort that will transform the I-75 and 122 interchange and provide a regional destination for entertainment, retail, offices, and living.

In the months to come, the City of Middletown in conjunction with Warren County and other partners will be finalizing a development plan for this strategically important commercial area that draws local and regional families and businesses to Middletown.

This catalytic move by Council reinvests in the local economy while also propelling Middletown’s intentional growth forward in an area primed for revitalization. 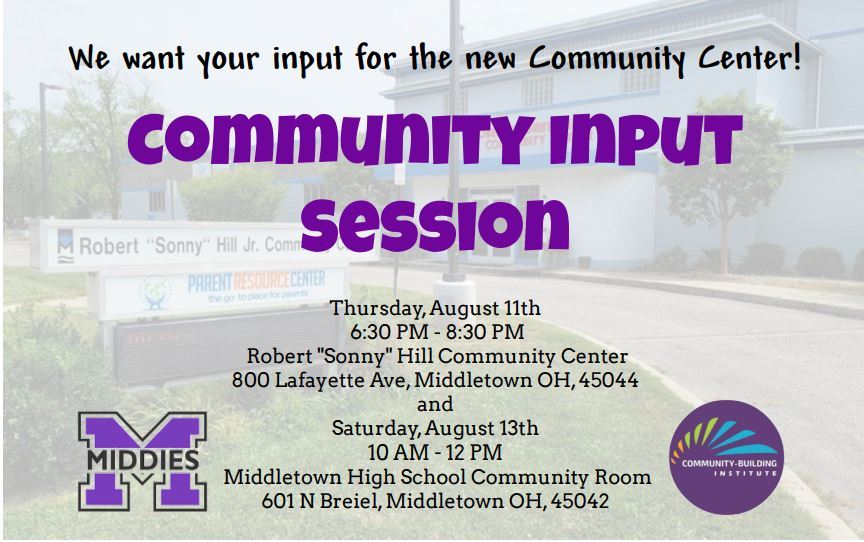 The City of Middletown will receive funding from Butler County Board of Commissioners to remediate the former Paperboard property along the Route 4 corridor. Butler County is providing the City $3 million from their American Rescue Plan allotment in order to advance a plan that will develop the site for future businesses.

On January 1, 2020, the property was destroyed by a fire that had engulfed it in flames when Middletown Division of Fire, along with Monroe, Liberty Township, and Franklin Fire Departments arrived on the scene. The abandoned property includes 14 acres.

The site was most recently owned by BP Logan Corporation and was foreclosed upon by Butler County Auditor in October 2018. City of Middletown gained ownership of the property from Butler County through forfeiture to the State of Ohio around the time of the fire. The City demolished a few buildings on the site since 2020. This important funding will allow the City to complete the remediation process on the Paperboard site and revitalize it into productive use to the benefit of the City and Butler County. Paul Lolli, Acting City Manager shared, “The City of Middletown appreciates the generous support of the Butler County Commissioners in this redevelopment effort.”

Celebration begins at 4 p.m. at Smith Park in Middletown. Come out to hear the bands I Dig Pig and Dayton Funk Allstars and stay for the fireworks/Pyro Jump presented by Yokum and Fastrax Skydivers. 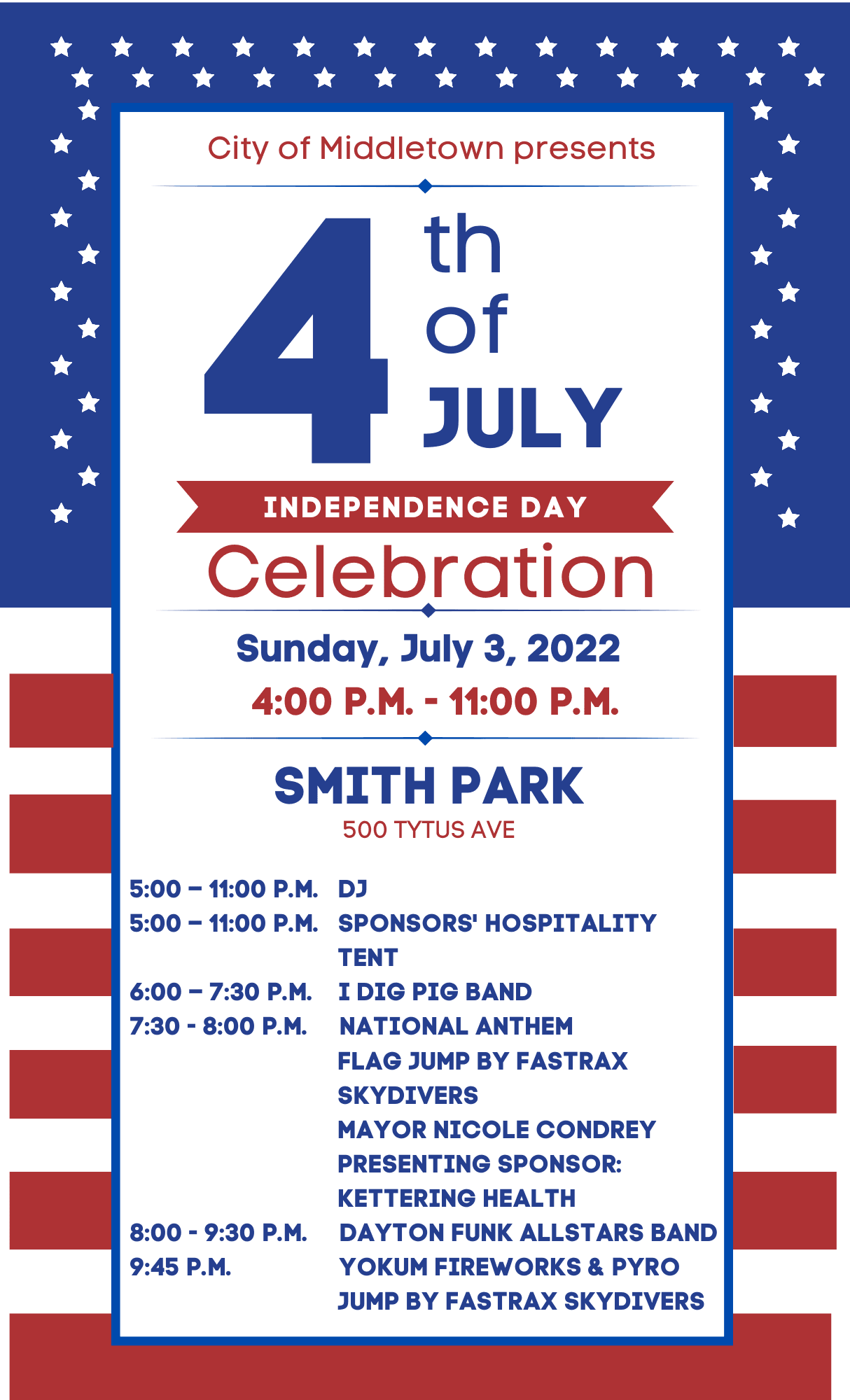 At the Tuesday June 7 Middletown City Council meeting, Middletown Division of Fire Assistant Chief promoted Andrew Turner to the rank of Captain. Pinning Captain Turner was his wife, Heather, with additional family looking on. Captain Turner was a member of the first D. Russell Lee Fire Academy class in 1995, which is now a part of Butler Tech. He began his career as a Middletown Firefighter a short time later in April of 2000. He was promoted to Squadman in January of 2003 and Fire Apparatus Operator in August, 2014. Captain Turner rose to Fire Lieutenant in October of 2019. He earned degrees in EMS Management and Fire Technology and Leadership through Cincinnati State in 2019 and completed Maxwell’s 21 Irrefutable Laws of Leadership program through Ohio Fire Chief’s Association. Captain Turner represents the Middletown community as a Medical Team Lead with Dayton Honor Flight, an organization that transports area veterans to Washington D.C. to visit the memorials and honor their service to the United States Military Service. 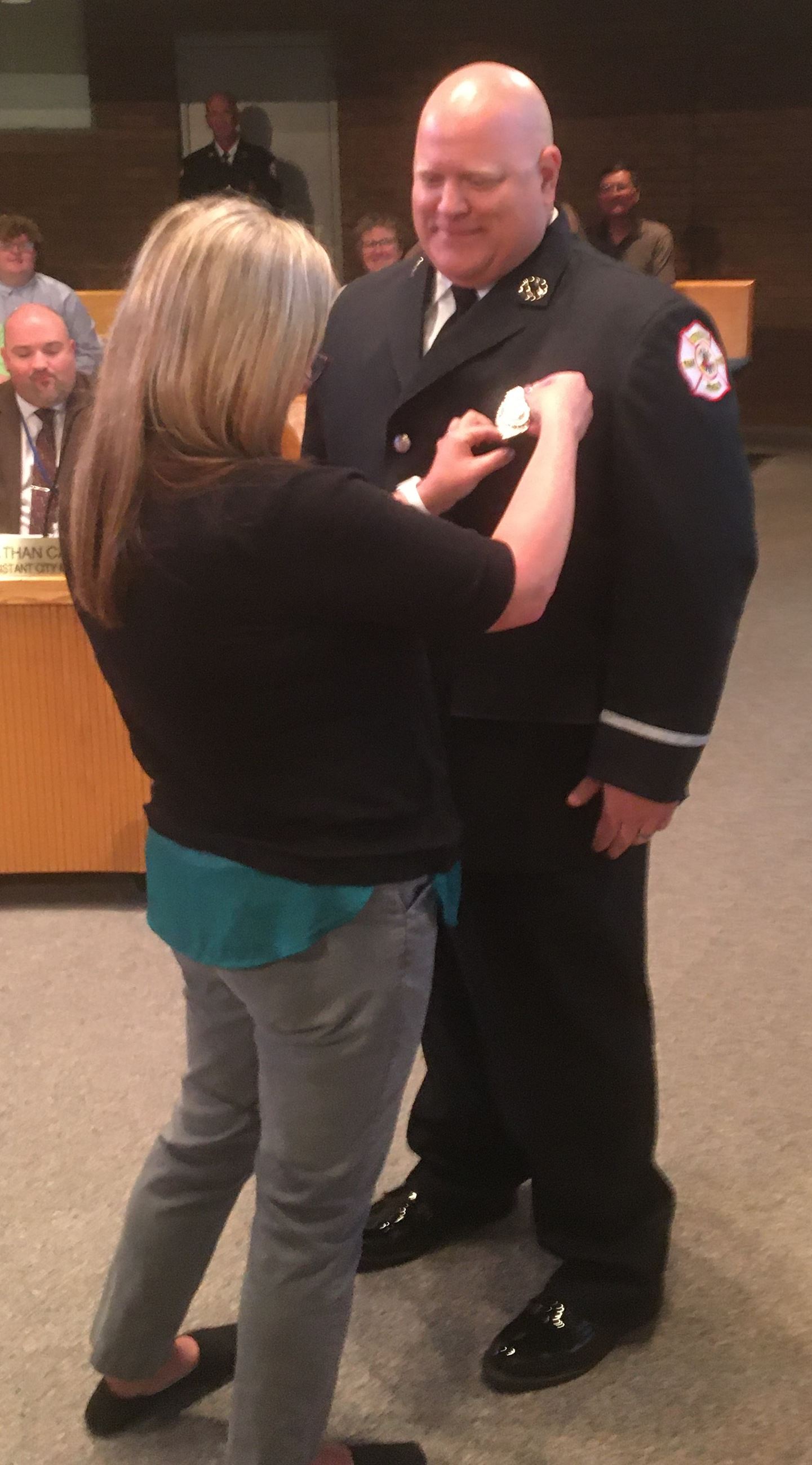 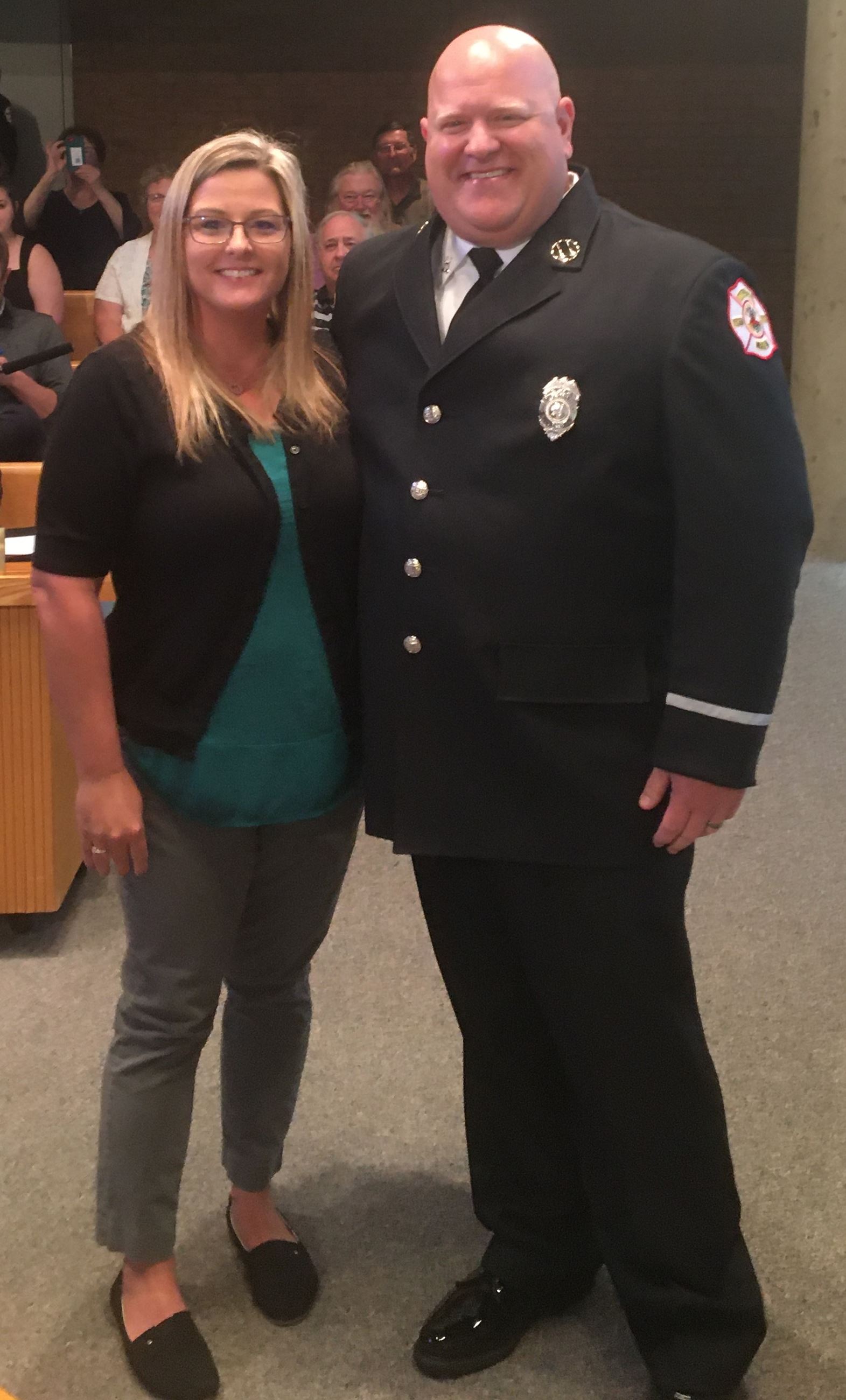 Middletown Police Department and Middletown Fire Department hosted community students in the Leadership Club on Wednesday, May 4, at the Sonny Hill Community Center. MPD and MFD members offered the 13 to 14-year old students a better understanding of their jobs and how they interact in the community. Students gained insight and perspective into the day to day activities of first responders and what it takes to be a police officer or firefighter/EMT. “It is an honor to mentor the youth of the community we serve. The Middletown Police Department prides itself on the partnerships we continue to build upon with the community,” stated Chief Birk.  MPD Chief Birk, Deputy Chief Crank, and Detective W shared their experiences of being on the police department as well as things the students can do to better support their community. Det. W showed the students how he collects fingerprints and other types of evidence on crime scenes. “The kids of Middletown are our future, so anything we can do to help them is a bonus for us.”

Likewise, members of the Station 81 platoon from MFD spoke with the students about what it’s like to be a firefighter and paramedic in addition to showing the students some of the items they use on emergency runs such as the heart monitor, an intravenous line with fluids, and chest compression tool in addition to providing access to the trucks.  “It’s very exciting to see our youth interested in a career in public safety. The Middletown Division of Fire continually works with Middletown City Schools and children to engage students for a career in the fire service,” stated Acting City Manager and Fire Chief Paul Lolli.

Middletown City Council recently approved additional funds for the Leadership Club to continue at the Community Center. The money improves the quality of the programs and allows the opportunity for more community children to participate and gain important experiences. 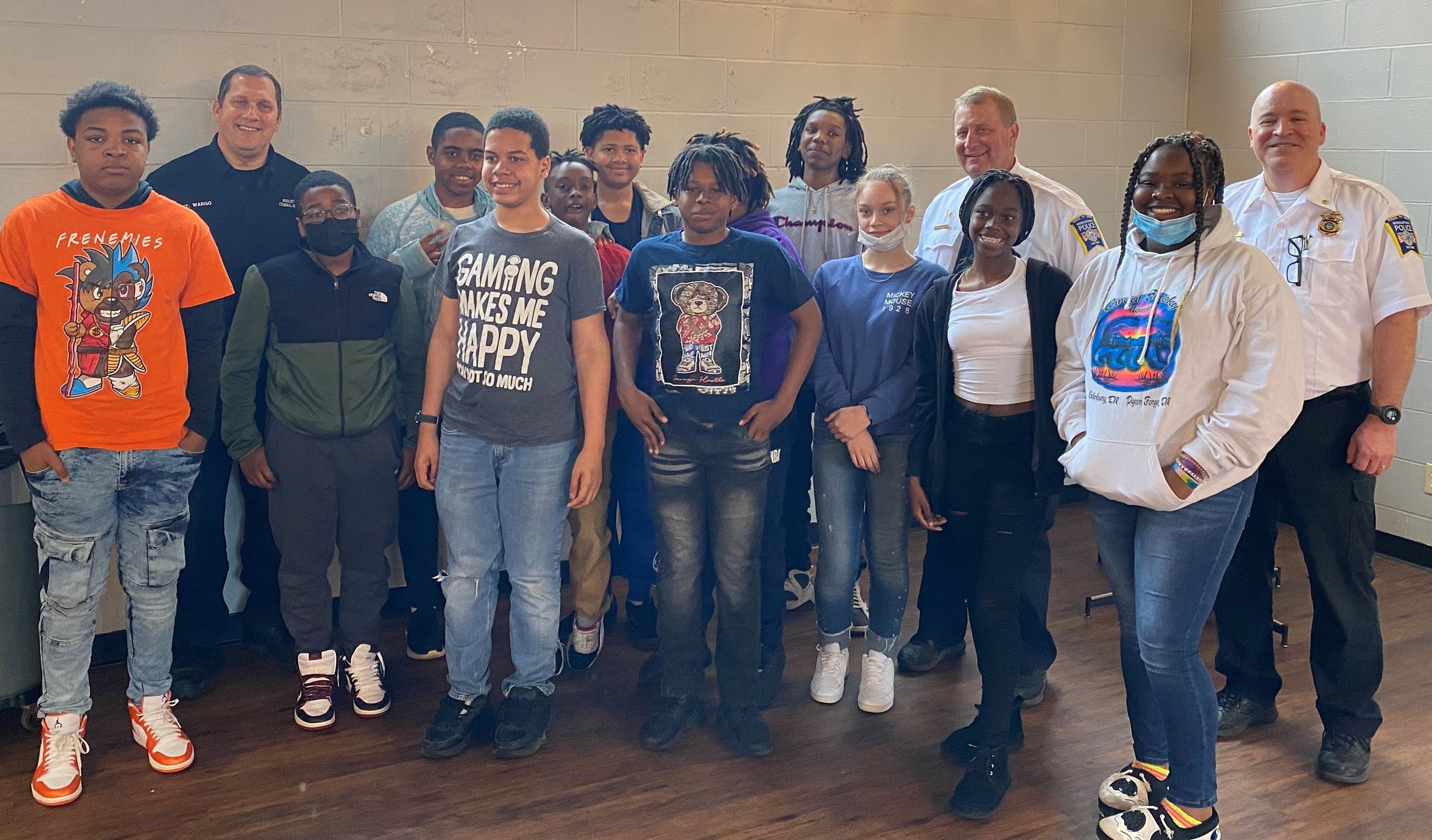 The City of Middletown Receives Award for Excellence in Financial Reporting

The City of Middletown received a Certificate of Achievement for Excellence in Financial Reporting from the Government Finance Officers Association (GFOA) of the United States and Canada. The award recognizes the city for its annual comprehensive financial report for the fiscal year that ended December 31, 2020. “This is the City’s 35th year in a row winning the award,” stated Samantha Zimmermann, City of Middletown Director of Finance. “Our goal is to strive for transparency in all aspects of governmental accounting and financial reporting.”

An impartial panel judges the report “to meet the high standards of the program, which includes demonstrating a constructive spirit of full disclosure to clearly communicate its financial story and motivate potential users and user groups to read the report.”

The GFOA honors government organizations with the Certificate of Achievement, which is the highest form of recognition in governmental accounting and financial reporting. Attaining this level of success is a significant accomplishment for the city and city administrators.

The Growth Award is bestowed upon the City of Middletown alongside their Tree City USA recognition for demonstrating environmental improvement and a higher level of tree care. To earn the Growth Award, the city achieved major milestones and performed annual activities that earned points in five categories that build sustainable community forestry programs over the long term such as: building a team, measuring trees and forests, planning the work, performing the work, and building the community framework. “The City of Middletown is committed to maintaining a healthy urban forest and continually working to improve our efforts to strengthen and support our canopy infrastructure,” stated Allison Manning, City of Middletown Natural Resources Coordinator.  “The trees throughout our city provide essential shade, clean the air and support a living ecosystem, benefitting water quality and providing food and habitat for wildlife. It’s estimated that Middletown’s urban forest removes 182,000 lbs./year of air pollution and provides a value of 219 million gallons in avoided storm water runoff within the city according to i-Tree Analysis tools, making it a vital part of Middletown’s infrastructure. Middletown’s committed toward tree health provides spaces in the community with a populous of trees on city property. While the Park Board is a small group of volunteers, they are dedicated in establishing new tree canopy in city parks, medians, and city properties.

In addition to celebrating the Tree City USA Growth Award and in conjunction with Earth Day on April 22 and Arbor Day on April 29, the City of Middletown will participate in Earth Day Clean-up on Saturday, April 23. Please visit the following website to participate and help Keep Middletown Beautiful!  https://keepmiddletownbeautiful.org/city-wide-earth-day-cleanup/

"Tree City USA communities can experience the positive effects that an urban tree canopy has year after year," said Dan Lambe, chief executive of the Arbor Day Foundation. "The trees being planted and cared for by Middletown are ensuring that generations to come will enjoy a better quality of life. Additionally, participation in this program helps cultivate a sense of stewardship and pride for the trees the community plants and cares for."

More information on the program is available at www.arborday.org/TreeCityUSA

About the Arbor Day Foundation

Founded in 1972, the Arbor Day Foundation has grown to become the largest nonprofit membership organization dedicated to planting trees, with more than one million members, suppo1ters and valued partners. Since 1972, almost 500 million Arbor Day Foundation trees have been planted in neighborhoods, communities, cities and forests throughout the world. Our vision is to lead toward a world where trees are used to solve issues critical to survival.

As one of the world's largest operating conservation foundations, the Arbor Day Foundation, through its members, partners and programs, educates and engages stakeholders and communities across the globe to involve themselves in its mission of planting, nurturing and celebrating trees. More information is available at arborday.org. 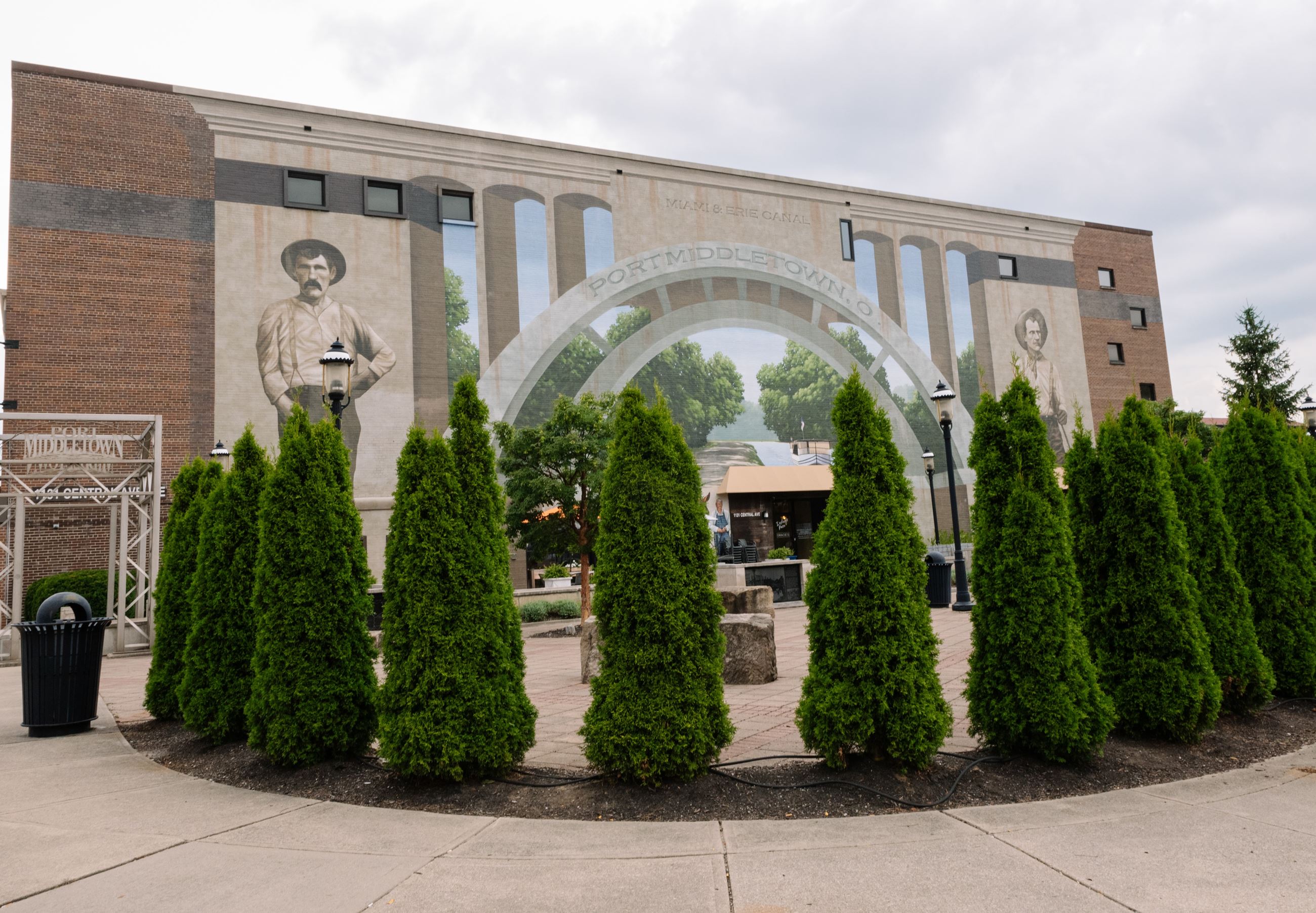